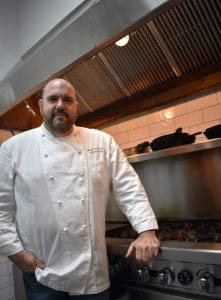 A native of Louisiana, Chef Michael Anthony Dardenne found an early appreciation of thoughtful food in his Maw Maw Babin’s southern kitchen. Watching Jacques Pepin, Julia Child, and Paul Prudhomme as a child cemented in him a real desire to pursue a career in the culinary arts.

While attending high school, Michael rose from apprentice cook to Sous Chef at White Oak Plantation in Baton Rouge. After working in Maryland for Renaissance Hotels and graduating from Baltimore International Culinary College, Chef Michael cooked in Atlanta, Georgia and Times Square, New York. A stint in London, England further expanded Chef Dardenne’s appreciation for the flavors and techniques which he blends with his French Creole foundation. Simple and classic treatment of high quality ingredients with perfectly balanced spices is this Chef’s style.

Chef Dardenne has enjoyed working on behalf of many charitable organizations including St. Jude Children’s Research Hospital and the Juvenile Diabetes Association, as well as serving on the board of the nonprofit Baton Rouge Epicurean Society. A published culinary writer and food stylist, Michael has worked with the Louisiana Secretary of State as a Culinary Ambassador and as Chef Coordinator with Toyota Corporations’ Farm to Table Tour. Recognitions have come in the form of cooking competition honors, people’s choice awards, and nominations for Chef of The Year by the Baton Rouge Hospitality Foundation.

“I endeavor to treat every plate, every time, as an opportunity to create a lasting memory for every guest”

The St. Francisville Inn prides itself on its culinary offerings.
WINNER OF 2019 DINERS CHOICE AWARD