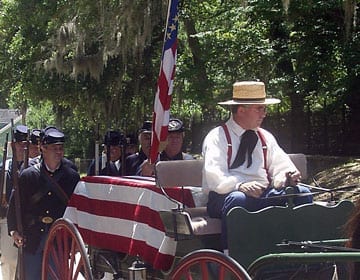 The Feliciana Masonic Lodge #31 again takes part in the annual “Day the War Stopped” reenactment of the Masonic burial at Grace Episcopal Church of Union Lt. Commander John Elliot Hart – a moment during the Civil War when two warring sides laid down arms to honor their dead together through the common bonds of Masonic Brotherhood.

In June, 1863, the bloody siege of Port Hudson was pitting 30,000 Union troops against 6,800 Confederates, fighting for control of traffic on the Mississippi River.  The USS Albatross was patrolling the Mississippi off Bayou Sara just below St. Francisville.  On June 11, its commander, Lt. Commander John Elliot Hart of Schenectady, New York, died aboard ship.  Unable to obtain a suitable coffin, an ensign was sent ashore in hopes of making arrangements, preferably for a Masonic burial, as Commander Hart was a Mason.  Once ashore, officer Theodore DuBois contacted Masons in nearby St. Francisville to request a Masonic service. Word reached Captain William W. Leake, an officer in the Confederacy and the Senior Warden of the Feliciana Lodge, who found it his duty to afford a decent burial for his fellow Masonic brother.  Thus were animosities put aside and the war stopped, if only for a few hours.

Each year the Lodge and the town gather to commemorate The Day the War Stopped in St. Francisville with various events that include a play at Grace Episcopal (9:30 am), a burial (10 am) and graveside reenactment (10:30 am) at the corner of Prosperity and Ferdinand strees, a jambalaya cookoff along Prosperity Street (11 am 1pm), dancing and music (12:30 pm–2 pm) at Grace Episcopal, a talk from historian Bo Trisler (2 pm–2:30 pm), and a gala at the Myrtles Plantation. 7 pm–11 pm. All free (except the gala, $25 at tix.com) and open to the public. Facebook.  Credit:  Country Roads Magazine, May, 2018.

7 pm to 11 pm Gala at the Myrtles Plantation.